“Investment success requires sticking with positions made uncomfortable by their variance with popular opinion.” – Howard Marks

In this commentary we cover:

In our last commentary, we noted how the fundamental nature of capitalism was changing and why it was important to see the world as it really is. We also noted how technology-driven competitive advantage is becoming increasingly important in almost every sector. Today, investing in “technology” is far different from my father’s siloed technology investing in the 1970s and ‘80s. MSCI, the world’s leading index and analytics provider, which manages the Global Industry Classification Standard (GICS®) that categorizes all companies into specific sectors, is belatedly making some changes to recognize this reality.

On September 28, 2018, the telecommunications sector will be renamed the communications services sector, to account for the integration of telecommunications, media and internet companies. The renamed sector will include existing telecommunication companies, as well as selected consumer discretionary companies currently classified under the media industry group and the internet & direct marketing retail sub-industry, along with select companies currently classified in the information technology Sector. While these are the largest changes for the GICS in its history, it does not go far enough, in our view, for those who seek to see the world as it really is.

Investors who are forced to view investing through the lens of the GICS sector classification system – like almost all institutional investors – will necessarily need to see the world through the eyes of MSCI. Unfortunately, we believe this view is a lagging indicator, as it will belatedly recognize a world which has already changed. They are already behind, even before they make their biggest structural changes so far!

We can all see that consumer behaviour is evolving faster than at any other time in living memory. This is due to the increasing ubiquity of always-on technology, the powerful influence of psychologically addictive content and customized social media feeds. We believe that in order to reach their customers almost every company is a digital company, whether they know it or not. In our last commentary, we cited Domino’s (NYSE:DPZ) as an incredible turnaround story and its self-described transformation into a “technology company” as an instructive mental model for the modern era. Describing Domino’s over four years ago, a JP Morgan analyst commented, “You’re a technology company disguised as a marketing company, disguised as a pizza delivery company and you have really functionality in all three.” Bingo.

We don’t really care whether MSCI considers Domino’s a technology company or not. If a company acts like and considers itself a technology company, then that apprises our thinking on the subject. We prefer thinking independently and staying nimble, rather than following the strategies of slow-moving institutions and popular opinion.

History has shown that technological disruption is not new. However, what has changed is that the pace of technological change is accelerating. The time between the early adopters (the future is already here) and when the masses arrive in force (evenly distributed) is shrinking (see chart). Widespread adoption of electricity took more than four decades after it was first commercialized in the US but it has impacted virtually everything over time. Change is much more rapid today, with smartphone adoption becoming widespread in the US in less than a decade. It too will continue to have widespread impact. What will be more evenly distributed ten years from now? Autonomous driving? Cryptocurrency? Drones? Yet-to-be-developed business models that will be driven by the upcoming advances in artificial intelligence? Today is not the time to be complacent with companies and management teams who are content to milk their historic cash cow businesses. The willingness to experiment, and having the capacity for continuous reinvention, will be a source for emerging competitive moats and tomorrow’s potential compounders. 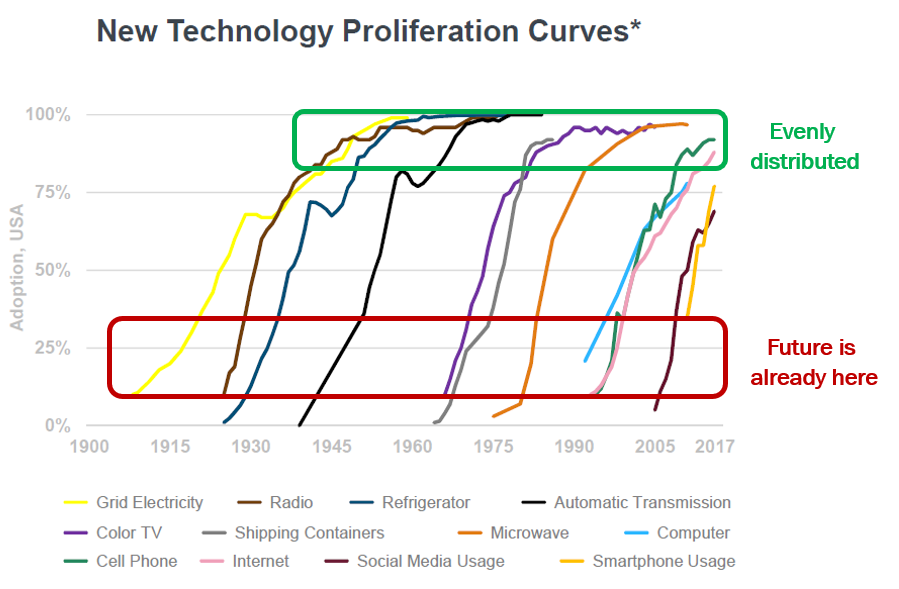 “You’re looking for a mispriced gamble. That’s what investing is. And you have to know enough to know whether the gamble is mispriced. That’s value investing.” — Charlie Munger

One of our favourite places to find potentially mispriced stocks is to identify already-great enterprises which we are able to understand, led by an honest and capable management team, and that are experiencing some temporary problems. First, we attempt to assess the nature and severity of the challenges. Are the issues cyclical or structural, self-induced or caused by external factors, people-driven or something else altogether? The next step is to assess what expectations are already priced into the security. Typically, we find that we don’t have the ability to handicap the odds because the business is outside our circle of competence or the degree of complexity is simply too high. Most ideas should really be left on the “too hard” pile. Sometimes we understand the business and admire the management team, but find that the market price is roughly right, or at least close enough to a fair value that there is no significant margin-of-safety to make an investment. In such cases, we pass and go to the next idea. But every once in a while, we find a situation where we believe we are well equipped to assess the important needle-moving factors and where the odds seem favourable. We find mispricing typically occurs because the market’s time horizon is shorter than ours (behavourial edge), we think differently about commonly-held information or the stock price implies that recent trends will extrapolate far into the future (analytical edge). One such “mispriced bet” came to our attention earlier this year.

During the first half of the year, we built an initial core position in Middleby (NASD:MIDD), a leading maker of equipment for restaurants, the food processing industry and consumers.

Our thesis, summarized in bullet form:

Since taking over the helm in 2001, CEO Selim Bassoul and his management team have transformed Middleby from a small, unremarkable food equipment maker into one of the world’s largest commercial food equipment manufacturers. It has three synergistic platforms serving the restaurant industry, large commercial bakeries and meat producers, and consumers in search of premium kitchen appliances. The stock has been a “hundred bagger” under Bassoul’s leadership, driven by strong organic growth, accretive acquisitions as well as some multiple expansion. Despite this past success, the growth runway ahead remains long, in our view.

Middleby essentially supplies the “picks and shovels” to the restaurant industry. If you have eaten at a restaurant or ordered takeaway lately, your food was likely cooked on Middleby equipment. The equipment industry benefits from a number of structural trends taking place at the consumer and operator level. Although individual restaurants and chains can be risky, the industry as a whole in the US has witnessed almost non-stop nominal growth for decades, as increasingly busy lives, combined with more meal choices and greater convenience have led to higher demand for meals that are not cooked at home. According to the National Restaurant Association, industry sales have had only one nominal revenue decline in at least 48 years of data (in 2010).

Delivery is another favourable trend, as less cooking at home means more food needs to be cooked on commercial equipment. As the Domino’s case study shows, digitization makes it much easier to order food, but timely delivery is important and a bottleneck for many restaurants at peak times is in the kitchen. Soaring labour costs and shortages are compelling operators to consider more automation from leading innovators like Middleby, effectively substituting capital for labour. In addition, emerging markets will be far larger over time as incomes rise and follow the lead of the developed markets. US based restaurant chains, where Middleby maintains excellent decades-long relationships, are expanding abroad along with their time proven partners.

In addition to these secular tailwinds, the company has an extraordinary track record, outpacing the growth of the market through disruptive innovation and its proven acquisition framework. What makes Middleby unique is the fact that it’s three synergistic platforms leverage its core innovative technology. It is a leading hot-side restaurant equipment supplier that has taken its expertise into the premium residential kitchen equipment market. Today, much of the innovation to improve speed and taste in high-end restaurants is increasingly available to discerning consumers. It has also leveraged its restaurant expertise into the bakery and food processing industries. Successful M&A tends to be rare in corporate America and numerous studies show that most acquisitions destroy shareholder value. However, there are always exceptions to the rule, and inorganic growth has been a key piece of Middleby’s successful formula over time. Numerous small tuck-in acquisitions with the occasional large platform have been very well executed and accretive. There is more than ample evidence to believe this strong track record should continue as long as the current management team remains in place.

Of note, the current management team has reinvented Middleby six times since the start of the millennia with smart, forward-looking bets on the future. Each time the company has emerged stronger. It is just coming out of its latest major period of “reinvention”, which has caused disruption within the organization. Although reinvention comes with risks, maintaining status quo is arguably even riskier in today’s fast-changing world. We particularly like those situations where the challenges are “self induced” because management are willing, and have the capacity, to sacrifice short-term results in order to carve out an even deeper competitive position for the future. As the saying goes, the management team has been-there, done-that…multiple times. The proof is in the pudding. Middleby has enjoyed best-in-class return-on-capital and operating metrics over numerous cycles.

Proven compounders rarely trade at a discount to the market, but as we have seen in the past, there can be sporadic bumps in the road which push down such stocks to compelling valuation levels. Investors have been concerned about the weak organic growth across all three core segments, as well as the full price for a proposed large acquisition (Taylor) which will temporarily increase financial leverage. The stock is trading not far from the same levels as three years ago, even though the intrinsic value of the business has increased. The cycle is now turning favourably and we believe the headwinds are set to become multi-year tailwinds as the benefits from the most recent reinvention phase start to pay off.

We believe today’s concerns will prove temporary for this proven compounder and, from a long-term perspective, are more than adequately discounted in the stock. We are long MIDD.