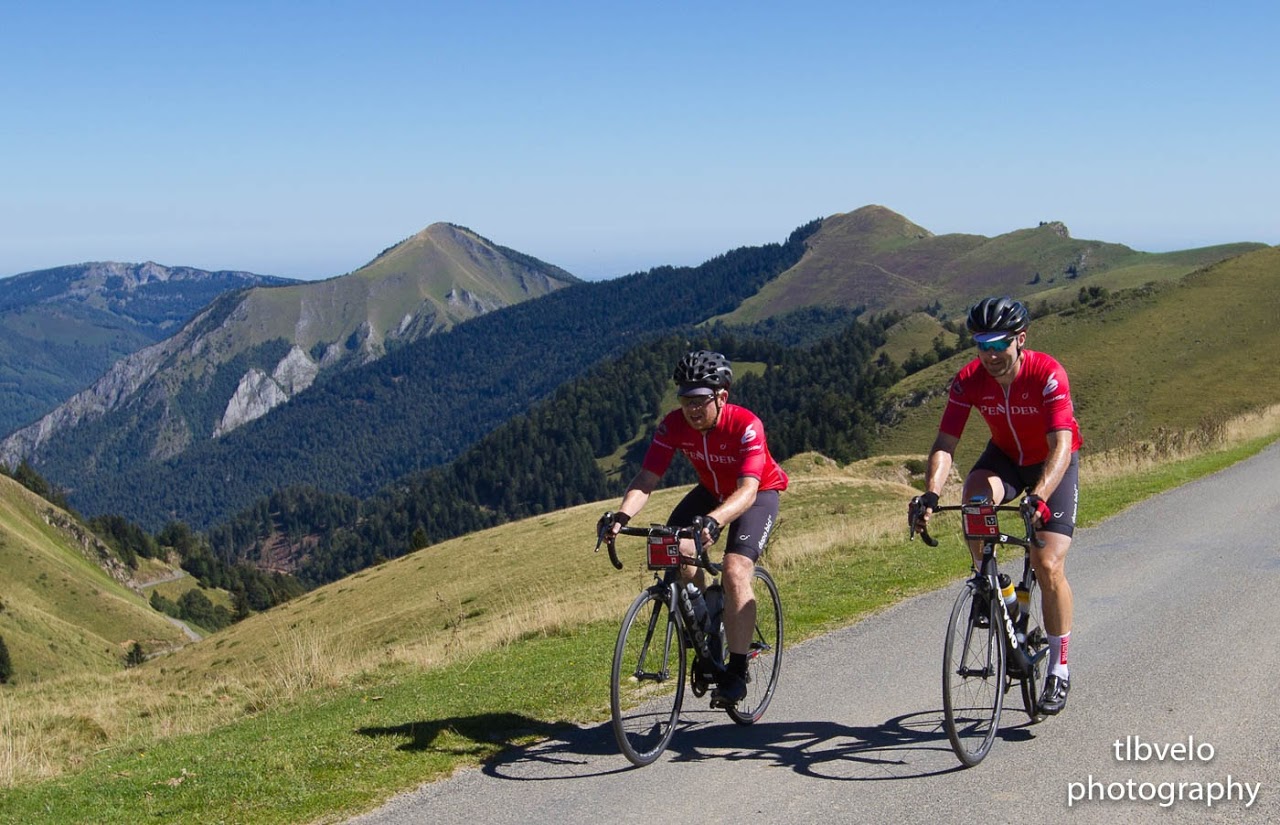 In August David Barr, Pender’s President and CEO, completed the Haute Route. A seven day cycling race through the French Pyrenees from the west coast of France to Toulouse. Riders climbed up over 20,000 metres of elevation during 800 kilometres of racing. Now safely back down to earth, I asked Dave how it went.

How did you do?

“Great. We achieved our goals.” Dave rode with a team of four others. “Our game plan was to survive and ride within ourselves for the first two days and then reassess after that. On day three we started riding a bit more aggressively, pushing ourselves closer to the limits.”

Was it what you expected?

Dave did much of his training on the North Shore Mountains of Vancouver and around BC’s Lower Mainland, where uphill gradients are around 6-7%. “We got to the first climb, and because the routes are so well ridden they’ve put up markers telling you how steep each kilometer is. So much steeper than we had anticipated. We routinely rode up gradients averaging 12-18%.

There were five of us on the ride and at the end of day two we were sitting round the table at dinner. We could barely lift our forks. My coach was part of our team and I looked at him and said, “You never said it was going to be this hard.” And he said, “Of course not – you wouldn’t have signed up!”

It was harder than anyone had expected, but our training regime paid off and gave us the fitness base we needed to adapt to the rigours of reality. We began to move up in the standings with each days racing.”

Did you ever think about quitting?

“There were several challenging moments. You’re climbing up 18% to 20% gradients for extended periods and your legs are screaming at you. Only the bravest souls don’t think about quitting in those moments. I’d anticipated this and had a rule of thumb – every time I felt like quitting, I had an energy gel. Yep. I had lots of energy gels.”

How did you stay motivated?

“To be honest the routine gets you through. You wake up, you eat, you get ready. Mentally you go over your plan for the climbs that day. When you’re on the road you’re just coaching yourself through each kilometre. We took a few moments at the top of a climb to enjoy the scenery. We knew we weren’t going to win, so we wanted to take away some memories that were of more than just the view of someone else’s rear wheel. Then, as soon as the days racing is done, all your attention turns to preparing for tomorrow and conserving as much energy as possible.

I also had a lot of support from my family and the team. My kids gave me motivational stickers that I put on my water bottle like “Go Daddy Go” and “Shut Up Legs”, and we had great team spirit. We recognized when one of us was down and found ways to pick each other up.”

The worst kind. The airline lost Dave’s luggage, including his bicycle on his outbound trip.

“In investing we always look at a number of possible scenarios for every holding but every now and then, something happens that you didn’t account for. We travelled to France several days early so we had a buffer in case of a baggage mix up. But it wasn’t enough. So I had no bike, no gear and no power meter. I had to rent a bike and borrow gear.”

It took the airline 10 days to locate and deliver Dave’s luggage. He was able to complete the last two stages on his own bike.

“I could have been really upset about it but that wouldn’t have been productive. I just made alternate plans and moved forward. It wasn’t how I saw things going, but I wasn’t about to ruin eight months of training and the chance to achieve one of the biggest challenges of my life because of something that was out of my control.

In particular my power meter was in my luggage so I had to make do with my heart rate monitor. It was a blow – it’s key for climbing mountains as it tracks your aerobic zones. If you can’t pace yourself, you compromise your performance for later in the stage and the race. Just like work really. Investing is more of a marathon, than a sprint.”

How did it feel to cross the finishing line?

“Totally surreal”. Dave crossed the line after around 33 hours in the saddle. “I was so exhausted and it had been so hard. It took a day or two to process what I had just achieved. Looking back, I absolutely loved the training, pushing myself to the limits and achieving such a big physical goal. It’s something I’ll remember for the rest of my life.”

I’m fit and energised. I’m excited to be back at the office and in the thick of uncovering new ideas for the funds. I may not do this event again, but I’ll continue to challenge myself.”