Protecting capital and growing wealth can benefit from long-term thinking.

The concept of market timing—the idea that successful investing decisions can be based on predicting future market movements—is as seductive as the Sirens of Greek mythology who ensnared sailors with the sweetness of their songs. Students of Greek mythology will recall the sailors did not fare too well. Likewise, as tempting as it may be, investors should be wary of succumbing to the allure of trying to time the market.

The adage, “it’s the time in the market, not market timing”, that determines performance, is useful for restless investors who feel compelled to be overly active. Markets, like the world at large, are complicated. Certainly, investing would be much easier if everyone could anticipate periods of excess volatility and position their portfolios accordingly. Unfortunately, this is rarely a successful strategy for protecting and growing capital over the long term.

“Market timing is an unreliable way to build wealth.”

Market timing is an unreliable way to build wealth. It is a strategy rife with the potential for cognitive and behavioral errors. For example, market timers need to choose the right asset at the right time and at the right price, a situation that introduces room for mistakes. Calling market bottoms and tops is notoriously difficult; these become evident only in the rearview mirror. This is one of the reasons many investors find it difficult to re-enter the market after a bear market—and why they tend to miss strong rallies as a result.

A more recent study by Morningstar came to the same conclusion. Investors who held on through the Dot-Com crash from 2000-2002 and then through the Great Recession of 2007-2009 during which, at their lowest point, US markets returned negative 50.9%, then saw 93 months of expansion through 2018. Markets also continued to rise sharply after the initial shock of the Global Pandemic in 2020.

Market timing also makes investors more susceptible to emotion-based errors. Investors tend to be more optimistic and “risk-on” and buy during positive market days because of the fear of missing out (FOMO). Conversely, they are more likely to sell on negative market days due to fear and panic. This is understandable because, as the saying goes, “markets take the stairs up and the elevator down”. Market drops can come fast and furious, as they did during the Global Recession and the early days of the Global Pandemic in 2020.

Snapbacks can come back just as quickly, however, and missing those key periods can be hazardous to our wealth. Frequent trading also comes with additional costs in the form of commissions and taxes, and for those who collect income-tested government benefits, such as Old Age Security, the possibility of payment clawbacks.

As the graph below shows, holding equities can become less risky over the long-term and expected gains can off-set short-term losses. Since 1926, of 80 overlapping 15-year periods, no period resulted in a loss, though “past performance is not indicative of future results”. (Morningstar) 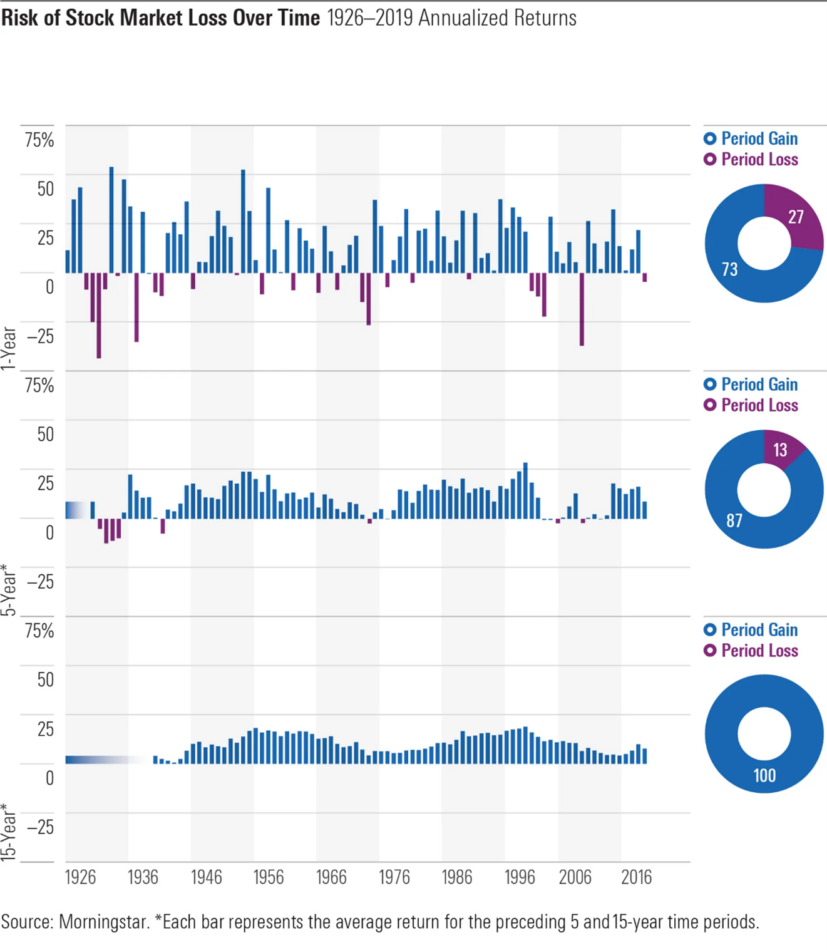 Can you separate the signal from the noise?

During periods of down markets, the financial media may exacerbate the problem, fanning the flames of fear and panic. Volatility is at the heart of all markets. Successful investing requires having the tools and the temperament to protect and grow capital under all economic conditions. “Look but don’t stare” is the advice given to those who become overly concerned with day-to-day or even month-to-month market gyrations and risk locking in losses. On the contrary, astute investors are more apt to take advantage of lower valuations to purchase the shares of quality companies at a relative discount. In his famous op-ed in The New York Times in 2008, during the bleakest period of the Great Recession, Warren Buffett wrote: “[But] fears regarding the long-term prosperity of the nation’s many sound companies makes no sense. These businesses will indeed suffer earning hiccups, as they always have. But most major companies will be setting new profit records in 5, 10, and 20 years from now.”

For investors with long-term horizons, market gyrations are a feature, not a bug of capital markets. The key is to maintain equanimity and remain humble. No one has the secret sauce on market timing but there is an open secret: It’s time in market, not market timing that is a marker of investing success.