What a difference a year makes. Or does it? Putting pen to paper (well, fingers to keyboard) for the 2019 year-end commentary, it was interesting to reflect on how things are today compared to a year ago. Last year we laid out three key observations for small and mid cap markets in North America.

I started off by commenting on how different things are a year later. In fact, the only change we have really seen in a material way is market sentiment which has become more bullish. What has remained the same are the fundamentals of small and mid cap markets, which remain very attractive as potential drivers for long term performance.

1.           Market sentiment is now extremely bullish
In stark contrast with this time last year, investors were no longer panicking, but were bullish on equities. The often-cited Fear and Greed Index developed by CNNMoney was in the “Extreme Greed” zone as we welcomed the New Year, while this time last year the same Index was in the “Extreme Fear” zone. We don’t rely on market sentiment indicators to make our investment decisions but watching them move in either direction helps us to understand the climate out there and make better judgement calls on the opportunities out there. The selloff in December 2018 provided us with many “tide goes out” opportunities and we believe we are now in a “needle in the haystack” investing environment.

2.         Top down small and mid cap valuations look cheap
Few would have predicted that the S&P 500 would have had such a strong rebound in 2019 after such an abysmal 2018. In fact, the US stock market has witnessed the longest and best performing bull run since World War II. That being said, the part of market where we tend to focus, the small and mid cap space, remains relatively cheap in terms of P/E ratios (according to WisdomTree data, below, that is compiled on profitable companies from the Russell 2000 Index (US small cap) and S&P Midcap 400 Index). 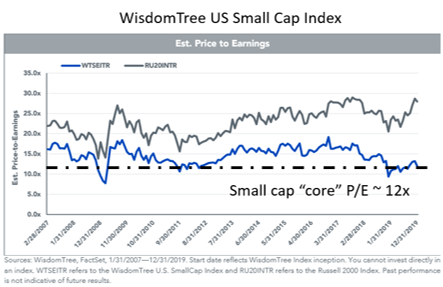 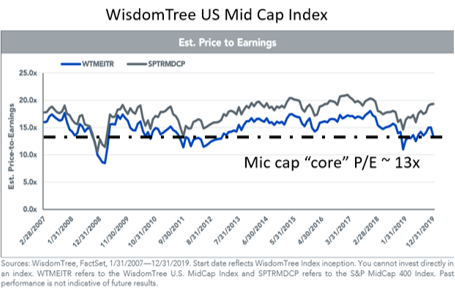 These charts show that profitless companies are continuing to attract interested investors in the small cap space and, while we follow many of these companies, profitable small caps remain off the radar and continue to be attractively priced.

3.         Bottom up view remain bullish
We view valuations of our portfolio companies as attractive. While we will not disclose our internal intrinsic value estimates on every holding, looking at the portfolios in aggregate, we believe they offer compelling value. The best way to gauge our conviction in our portfolio holdings is to look at our cash positions. The lower the cash, the higher our conviction. While up from this time last year, cash on hand is currently near all time lows at 8.2% in the Pender Value Fund and 5.5% in the Pender Small Cap Opportunities Fund, compared to on average around 20% cash on hand in these funds. This tells you that we are seeing many high conviction ideas on sale, at what we believe are discounts to intrinsic value. This time last year we had even lower cash positions, and note that we generally have on average around 20% cash in hand in these funds. In addition, with several portfolio companies in the middle of strategic reviews, we believe that private market value remains compelling with a degree of upside potential included with these special situations.

Death Spirals and M&A
Throughout the year we witnessed significant volatility in our market. There is very much a negative feedback loop at play in the investment world today. In the past we’ve talked a lot about market inefficiencies that present themselves, like index rebalancing and the related buying/selling of index funds. What we saw increasingly as the year progressed was a flight of capital from companies where volatility picked up. Investors moved on quickly from volatile holdings. We experienced this in our portfolios with Maxar, a top contributor for the year, SNC which we never considered owning prior to this year, bought and subsequently sold, and a holding we increased across a lot of our funds this year, MAV Beauty.

MAV is a global personal care company that went public in July 2018 in an IPO that could be nicely categorized as “Catastrophic Failure”, falling to 80% below its IPO price. In the true Pender Way, such events pique our value-seeking curiosity. We have seen this “death-spiral” many times over the years and have watched the resulting mixed outcomes with interest. But while investors shunned the stock, consumers were not shunning MAV products, which were one of the most sought-after gifts at the Pender Secret Santa in December. Having followed the company since its public debut, we liked the business and its founder CEO and believed unrealistic growth targets were the issue impacting the share price. After resetting expectations with their Q3 results and aided by tax-loss selling we were able to acquire a large position in the company and were pleasantly surprised to find the founder was also taking advantage of the opportunity. You certainly know how we feel about aligned executives by now!

The second thing we saw in 2019 was M&A continuing to drive performance in the portfolios, driven by the acquisitions of Espial, BSM Technologies, Solium Capital, Carbonite and especially Air Transat. The landscape for activity continues to look good with several of our holdings undergoing strategic reviews which we believe can unlock value.

December update
In the month of December, performance of our funds was in line with small and mid cap markets in North America. Both the Pender Value Fund and Pender Small Cap Opportunities Fund had a positive return of 3.1%[1] compared to the Russell Microcap’s 3.3%, while the S&P 500 returned 0.7% (in Canadian dollars) and the S&P/TSX was up 0.5%.

Maxar, Athabasca and Sangoma were some of the key positive drivers for both the Pender Value Fund and the Pender Small Cap Opportunities Fund, with Zillow and Howard Hughes also contributing to the Pender Value Fund. This was the third month in a row that Sangoma was in the top contributors list. It looks like investors are finally paying attention. It is also worth mentioning that Maxar’s share prices appreciated over 40% during the month as it completed the refinancing of its debt. The company also announced the sale of their MDA business at the end of the year and its share price has continued to run up to date in 2020.

On the flip side, there were a few minor detractors but nothing massive. Freshii was one of the detractors for both the Pender Value Fund and the Pender Small Cap Opportunities Fund as the stock remains unloved by others. Medicure was another detractor for the Pender Small Cap Opportunities Fund as share prices made an about-turn after they announced the preliminary results of a substantial issuer bid. Burford was a larger detractor for the Pender Value Fund, although there was no material negative news on the company.

In addition, we trimmed some of our higher weighted ideas that had performed well. Carbonite’s acquisition by OpenText was completed by the end of year. Finally, with the addition of Don Walker to the Pender investment team, we added depth in Canadian small caps with new names in Pender Small Cap Opportunities Fund but I’ll let Don talk about those in his first commentary.

The year ahead
People are feeling much better today than they were this time last year. Our part of the market remains relatively overlooked and, we believe, ripe with opportunity. However, given the strength in the major indexes and the increased potential for volatility, we will slowly take money off the table with our winners, hold cash and wait for opportunities to take advantage of the volatility and deploy opportunistically.

The Pender Corporate Bond Fund had a positive result of 1.2%[1] in December, and a total return of 5.6%1 for the full year, 2019. Credit markets ended the year buoyantly with the exception of longer […]

“Markets are constantly in a state of uncertainty and flux and money is made by discounting the obvious and betting on the unexpected.” – George Soros In this commentary we cover: Looking back at the […]