The Pender Alternative Absolute Return Fund finished December with a return of 1.2%, bringing year to date performance to 6.3[1]%.

December proved to be a challenging month for markets as the enthusiasm based on Federal Reserve Chair Jerome Powell’s remarks at the Brookings Institution on November 30th gave way to sober second thoughts about the path forward for interest rates, the economy and financial markets. The high yield market declined, with the ICE BofA US High Yield Index returning -0.8%. For the full year, the market returned -11.2%. 2022 was the second-worst year for the high yield market using ICE/BofA data since September 1986; only 2008’s -26.4% surpassed 2022’s losses. Despite the large losses experienced in 2022, spreads are only slightly higher than the 10-year average, finishing the year at 481bp only 34bp above the 10-year mean of 447bp.

Continuing a theme from much of the year, there was a significant shift in tone in market conditions in December. In the first half of the month the Fund sold into market strength as many of our higher quality, liquid high yield positions reached levels that we viewed as fully valued. The Fund also took sales in single B rated credits that we viewed as particularly sensitive to increases in risk premiums, eliminating positions in bonds backed by Tronox Incorporated (NYSE: TROX) and Six Flags Entertainment Corporation (NYSE: SIX). While the tone in markets shifted in the middle of December, it took a while before we saw value materialize in the high yield market. The Fund bought high quality, high yield late in December as a low liquidity environment coupled with a steep discount to NAVs in the largest high yield ETFs created pockets of opportunity to re-establish long positions. Despite macro weakness, we view much of the market as fully valued and didn’t cover any of our credit shorts in December.

The Fund added to loan exposures in December, participating in the TransDigm Group Incorporated (NYSE: TDG) new Term Loan H, which priced at a spread of 325bp and a two-point discount to par. This effectively increased the spread closer to 375bp, with a term to maturity of just over four years. The spread on this loan looks much better than Transdigm’s secured bonds, which have recently traded at spreads in the mid-200s. The Fund exited our position in Open Text Corp. (TSX: OTEX) unsecured bonds on strength in December, earning about a 7% return for a two-month hold on our position in the 4.125% 2031 bond. We continue to hold a position in OpenText’s Term Loan, which we believe is the cheapest credit instrument in the capital structure.

The Fund entered the commercial mortgage-backed securities (CMBS) market in December, buying a BBB-rated tranche of a mortgage loan backed by the Fairmont Austin, a 1,048-room property built in 2018. The property was built at a cost of $416 million and was appraised at $610 million in 2019 when the mortgage loan was originated. For the tranche we own to be fully covered, the property’s value only needs to exceed $190 million. It is our belief that asset coverage is about 2-3x at our level of the capital structure. The property’s Net Operating Income (NOI) is tracking ahead of 2019 levels based on the latest financial reports available. There has been robust transaction activity in the Austin hotel market over the past two years, with five comparable properties selling for approximately $550k per room on average. The cost of capital has increased and therefore, multiples should be lower going forward. However, it is our expectation that we would be comfortably covered, even in the event of a distressed sale of the property. We don’t expect that CMBS will make up a significant portion of the portfolio going forward, but when we can identify opportunities to get paid well to underwrite high-quality assets, a small allocation to the asset class is reasonable in our view.

The Fund’s Event Driven strategy was active in December as Rogers Communications Inc.’s (TSX: RCI.B) proposed acquisition of Shaw Communications Inc. (TSX: SJR.B) received a significant boost following Canada’s Competition Tribunal approval of the transaction late on December 29. The market reacted efficiently the following day, with Shaw’s equity trading up 9% and our position in Rogers 3.75% 2029 bond, which has a Special Mandatory Redemption (SMR) feature if the deal were to break, trading down about 1% on the day. The package traded as we had expected, resulting in a net gain for the Fund on the day. The Fund also added a position in Maxar Technologies Inc. (Nasdaq: MAXR) 7.75% 2027 bond, which we believe will likely require a make-whole call if the company’s sale to Advent International closes as expected in mid-2023.

As the Fund sold many of our longer dated high yield positions in early December, we covered a portion of our short positions in government securities. We expect to continue to manage duration closely, but believe that spreads are likely to be a greater source of risk in the coming quarters.

Excluding positions that trade at spreads of more than 500bp and positions that trade to call or maturity dates that are 2025 and earlier, Option Adjusted Duration declined to 1.3 years. The duration figure includes two Event Driven positions where we believe duration does not accurately reflect the option value embedded in the security.

“A sharp 2019-type rebound in 2023 is unlikely in our view, given the state of valuations, policy and fundamentals.”

Many investors are happy to put 2022 in the rear-view mirror. The impact of rising interest rates on long duration assets was the most important theme in markets over the past year. With a starting point of the lowest real yields in decades combined with historically very low nominal yields the set up was uniquely poor for fixed income. Additionally, credit markets were effectively priced for perfection, with high yield spreads hitting their lowest level since 2007 on December 28, 2021. Despite the brutal year for bond markets, spreads finished the year close to the 10-year average in both high yield and investment grade, reflecting little recession concern. While the peak impact of rising interest rates is quite likely in the past, the potential for a material spread-widening event remains. If government bond yields increase from current levels, the running yield now provides significantly more support for absolute returns than it did a year ago.

It is our belief that a regime change in markets occurred in 2022, as the bill came due for over a decade of exceptionally easy monetary policy. Until the past year or so, central bankers could credibly argue that there was no significant downside to their experimental approach to monetary policy from 2009 through early 2022. In retrospect, it is hard to believe the Federal Reserve was buying tens of billions of dollars’ worth of bonds per month and their policy rate glued to the zero bound as recently as March 2022, when year-over-year CPI inflation was 7.9% the previous month. Aging demographics and on-shoring of strategic products and industries are factors that suggest the future is unlikely to look like the recent past for inflation. We believe that lessons will be learned from this experience and central banks will be weary of coddling capital markets or continuing to use crisis management tools for years after the crisis has passed. We expect the trading range for government bond yields to rest higher than the QE era norm going forward. Therefore, it is a mistake to anchor to 2010-2020 all-in yields as a guide to risk-taking in credit markets.

A sharp 2019-type rebound in 2023 is unlikely in our view, given the state of valuations, policy and fundamentals. High yield spreads are tilted toward the tight end of the recent trading range, which has been 420bp to 600bp over the past six months. From a spread perspective, the tightening of the past six months looks a lot like the 2019 rally. 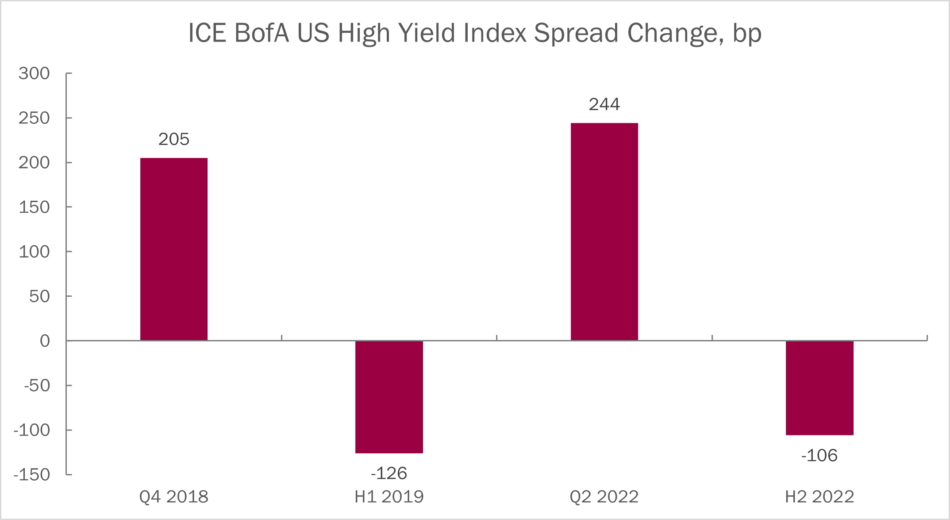 The absolute return experience for the market was significantly better in the first half of 2019, driven by interest rates and a pivot by the Federal Reserve towards more accommodative policy, despite no underlying economic weakness to justify a pivot.

Our base case for the near term is that we will remain in a range-bound market, with the past six months providing a relatively good guide as to where the trading range will be. This is consistent with how we see value at the individual security level as well; it was very challenging to find good value in higher quality liquid bonds in early August and early December. 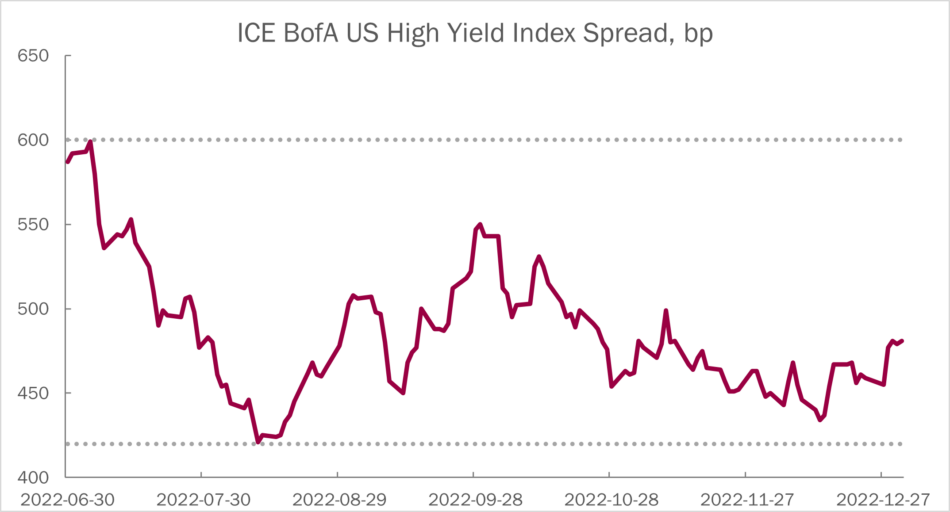 If the market were to break through the recent trading range, we believe that the risk is skewed toward the wider end. The potential for a recession and a repricing of risk premiums is the biggest risk to financial markets in 2023 in our view.

We believe the past year was an ideal environment for alternative strategies to prove their worth as a strategic allocation, with the traditional “60/40” portfolio putting up its worst absolute return in decades. While we are pleased with the relative return produced by the Fund in 2022, we strongly believe that one year does not constitute a track record. Our goal remains to produce consistent, long-term returns with limited drawdowns and a positive client experience. While we are off to a good start, there is still much work to be done.

[1] Class F of the Fund. Other classes are available. Fees and performance may differ in those other classes.

Dear Unitholders, The Pender Alternative Absolute Return Fund finished November with a return of 0.3%[1], bringing year-to-date performance to 5.1%. November was one of the more difficult market environments for the Fund to navigate, as […]